Peak Freaks autumn expeditions in the Himalayas will soon begin. 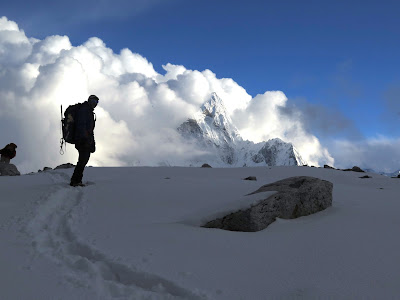 The political climate in Nepal remains unpredictable but nothing out of the norm.  A new prime minister has been elected, the ninth in eight years. Political shuffles like this rarely effect our expeditions in the mountains. Many are asking if Nepal is safe for travel and we say "yes it is". The fuel crisis is over and the country is trying to get back on it's feet.  The country relies on our tourism dollars more than ever now.

Thankfully there has been a considerable amount of snow this year created by the seasonal monsoon and three cyclonic events affecting the Indian subcontinent. We've been watching these storms and feel confident it will settle out by the end of September and the mountains will begin to heal from the past two years of warmer than normal temperatures, and ice-melt. It's hopeful that the snow will stabilize the potential for rock fall and landslides that can happen when there is not enough snow to glue to hold the mountains and routes together. All said, it looks like a good mix and it should be a better than normal autumn climbing season.

Our expedition supplies have been purchased, inter-Nepal transportation is booked, international flights are secured and our staff are anxiously awaiting our teams arrival.

Onward and upward! We are almost there.

Posted by Tim Rippel at 9:10 AM No comments: