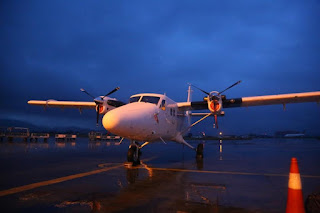 Tara Air, the airline Peak Freaks uses for flights to Lukla has added a faculty new Viking  DHC6 400  Twin Otter aircraft to its fleet. The second aircraft is due to arrive in September increases safety.

"Roshan Regmi, marketing manager of Tara Air, said the Twin Otter Series 400 aircraft boasts cutting edge avionics technology with an integrated full glass cockpit that features the Enhanced Ground Proximity Warning System (EGPWS), Traffic Collision Avoidance System (TCAS) to prevent from crashes, and full-color weather radar to show weather conditions.
Canada-based Viking Air had purchased type certificate of the legendary DHC6-300 Twin Otter aircraft from De Havilland in 2005. “It is the most versatile and successful STOL aircraft ever built and it was brought back into production in 2008 as the new Viking Series 400 Twin Otter,” Tara Air said in a statement on Wednesday. “The Series 400 Twin Otter picks up where the original de Havilland Series 300 Twin Otter left off, introducing upgraded Pratt & Whitney PT6A-34 engines, fully integrated Honeywell Primus Apex digital avionics suite, use of composite materials and approximately 800 other modifications incorporated to improve on the original series 300 aircraft.”
According to the statement, the Series 400 retains its ability to safely operate in the most remote and rugged environments in the world, from the sub-zero Antarctica, the hottest deserts in North Africa, the open waters of the Indian Ocean to the mountainous region of the Himalayas. No other Short Take Off and Landing (STOL) aircraft in the world has proven to be as versatile, the statement claimed.
Regmi said that the aircraft will be brought into operation within two weeks, fulfilling all required procedures. He said the new aircraft will be operated in remote STOL airfields of the country like Lukla, Phaplu, Jomsom, Dolpo and Simikot. “The new aircraft will play a vital role in transporting trekkers, local inhabitants and foodstuffs to and from these remote regions,” he added.
Tara Air plans to gradually replace its entire fleet of Series 300 and Dornier Do 228-212 aircraft with the new Viking Series 400 aircraft.
“Our second Viking 400 Series aircraft will arrive in September,” said Regmi.
Tara Air has brought the aircraft on lease for 12 months with an option to purchase after that. The aircraft costs US$ 6.9 million."
Source: Myrepublica     Peak Freaks Expeditions  peakfreaks@me.com
Posted by Tim Rippel at 9:23 AM No comments: